Westlands MP Tim Wanyoyi has warned that ODM must have free and fair nominations.
Speaking on Thursday during a party youth league meeting in Nairobi, the second-time Westlands MP also urged the party not to let the Nairobi governor’s seat slip out of its hands.
Wanyonyi said that it was time for ODM to take over the running and management of City Hall as party leader Raila Odinga takes charge of State House in 2022.
“When Baba (Raila) is at State House, we should not allow Nairobi to be managed by others. He should manage Nairobi. ODM should manage Nairobi,” the MP said.
“Let us ensure Baba gets our votes and many more. And as we negotiate with our partners, we should not cede ground.” 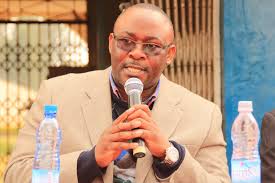 His sentiments were echoed by Nairobi Woman Rep Esther Passaris who said that the party should not entertain the thought of abandoning the leadership of the City.
Both Passaris and Wanyonyi agreed that loyal party supporters, leaders and members should be rewarded for their efforts, sacrifice and service.
At the same moment, Wanyonyi urged the party to stand with its candidates and not support candidates from other parties, especially those who may have decamped from the ODM.
“I cannot campaign for somebody who was in ODM and decamped. I will only campaign for an ODM candidate. Let us stand with the party,” he said.
Wanyonyi has declared his interest to vie for the Nairobi governor’s seat on an ODM party ticket in next year’s election. The MP is seen as the frontrunner in the race and he is set to announce his bid officially later this week.
Already, the ODM leader’s wife, Mama Idah Odinga, has endorsed the MP for City Hall praising him as the most befitting leader for the position. She described the MP as the epitome of integrity, well learned, honest and hardworking whose track record as the Westlands MP should be embraced by other leaders.
“Tim Wanyonyi is like my elder son, and he has a vision. We will ensure we support him so that he becomes the next Nairobi governor in 2022,” she said.