Comedian Eric Omondi has apologized to Citizen reporter Sam Ogina.
This is after Omondi claimed that Ogina dated his ex-collogue Jacque Maribe.
“I want to ask for his forgiveness, I panicked and in a rush to wash my brand I ended up mentioning him. So I wanted to say all the details to explain why I wanted DNA. It’s true they dated but mentioning him was unnecessary,” Omondi told Mzazi Willy M Tuva on Mseto East Africa.
“I would have said he was dating a popular news anchor.” 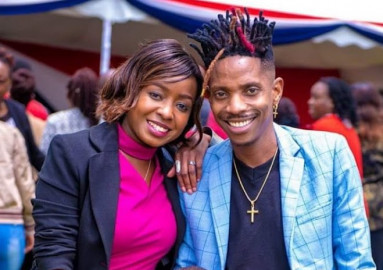 He says that he panicked and in a rush to wash his brand ended up mentioning Ogina.
The comedian had stated on his social media posts that Ogina was dating Maribe when they had a one night stand.
‘So we met at Radio Africa in 2012. I was working at Radio Jambo and Jacque was working at Kiss TV. “It was really a one-night thing because she was dating KTN’s Sam Ogina at the time. We used protection !!” Omondi said.
“So one Random night after a Radio Africa Staff Party and after a few bottles of whiskey and wine glasses Jacque and I happened.”
Omondi said she learned that Maribe was pregnant after Jacque told her two months.
He added; “I meant what I posted. Maribe has really failed me. As a mother, she has failed in protecting her son as everyone knows her son is mine. We had kept these under wraps for seven years why expose it now?”